In his second novel, Factotum, Charles Bukowski writes: “How in the hell could a man enjoy being awakened at 8:30 a.m. by an alarm clock, leap out of bed, dress, force-feed, shit, piss, brush teeth and hair, and fight traffic to get to a place where essentially you made lots of money for somebody else and were asked to be grateful for the opportunity to do so?” Turkish director Ramin Matin’s latest feature film, Siren’s Call, has a main character named Tahsin Dantellioglu, who is an “alarm clock guy” as Bukowski put it. Tahsin works as an architect for one of “those companies turning Istanbul into a concrete dump”. He is a very busy man. He always has to arrive somewhere, and he couldn’t able to reach in time. Never. He is a wealthy man, but he hates his job. He got married a very well-known construction company’s heiress, but they’re getting a divorce. Obviously, he is not grateful for the opportunities he had. He is really unhappy. He is stressed out. He says that he is suffocating, and he can’t breathe. We understand that he hates almost everything around him. He wants to escape his reality. And he is waiting for the right time for 5 years. Yes, 5 years… Like millions of young people in Republic of Turkey. When Tahsin meets an old friend named Siren in a pub, his life is suddenly changed. Siren had a very boring job, advertising, 10 years ago. But then, she moved to the South part of the country, and became a farmer in an organic farm which run by a small community. Tahsin learns that she lives in a very beautiful dreamlike place. No traffic, no construction. No noise. There is a small beach which has the whitest sand. And everyone there is genuine and polite. He sees that Siren is so happy. She has almost everything he needs at that moment. Siren, who had a crush on him years ago, invites Tahsin there, and gave him her mobile phone number. Indecisive Tahsin says, “I want to escape, but…”, and then Siren cuts his words by saying, “Well, then leave. Who’s holding you back?”

When Tahsin woke up that morning, he realizes who is holding him back: Himself! And the story begins… First, he orders her secretary a plane ticket for the city, Mugla, where Siren lives. He goes to work, the head office of Haroglu Construction, and he resigns his job in the middle of an important meeting. His father-in-law, Mr. Kutlug, curses him, and he asks her daughter where she found him. They call the security, and a security guard takes Tahsin’s company phone, and the keys of his company car. He has a flight to catch, so he grabs his suitcase which is full of his summer clothes, and goes out to the streets of Istanbul. After that, the film becomes a Kafkaesque journey.

Frederick R. Karl, author of a critical biography of Franz Kafka, has a definition for the term “Kafkaesque”. He said in an interview, “Kafkaesque is when you enter a surreal world in which all your control patterns, all your plans, the whole way in which you have configured your own behavior, begins to fall to pieces, when you find yourself against a force that does not lend itself to the way you perceive the world. You don’t give up, you don’t lie down and die. What you do is struggle against this with all of your equipment, with whatever you have. But of course you don’t stand a chance. That’s Kafkaesque.” Tahsin’s situation is beginning to remind us this, after the scene he gave his resignation. The environment around him clearly becomes surreal. Nothing (machines, taxis, credit cards etc.) works. All roads are blocked. And there is no way out. An endless torture begins, and continues. And then the story begins to give some of it’s messages via billboards and signs: “YOU ARE IN THE RIGHT PLACE TO WIN”, “THE LIFE BEGINS”, “SHAPE YOUR DREAMS” etc. Even the new buildings Tahsin designed named “PARADISE HOUSES 2”. All of a sudden, everything becomes surreal, and the story evolves into a white collar’s Kafkaesque nightmare.

Tahsin is a disturbed man like Michael Douglas’s character, “D-FENS” as they called him, in Joel Schumacher’s “Falling Down” (1993). He is a well-paid, urban middle-class man like him. He’s a white man in a white shirt and a tie, with a briefcase, who wanders through the streets of a big city. He seems weary and confused. He has a miserable life. He even respects the “no change without purchase” policy of a peddler, and tries to buy something he doesn’t need in a scene, like Douglas’s character. He is, too, in a “I’m as mad as hell, and I’m not going to take this anymore.” mode. Ramin Matin pictures Tahsin as a small but wild animal in a cage. He is trapped in Istanbul. But nothing we see is convincing. Almost everyone he encountered humiliates him. He doesn’t give up, or he couldn’t die. He keeps going in the labyrinth-like streets of Istanbul. He has a flight to catch. He struggles with unbelievable problems. His frustration rages minute-by-minute, and he begins to lie, curse and even starts quarreling with the people he met, and he even becomes a threatening person like Douglas’s character, D-FENS, in “Falling Down”. But unlike D-FENS, nothing Tahsin experiences in this process seems real to me. Nothing is as it seems. I think the thoughts of Tahsin are fighting each other until the end. We watch their reflections as people (two different peddlers, a taxi driver, a barber, two small-time crooks, Tahsin’s wife, Tahsin’s best friend, and his old friend Siren etc.). And his thoughts belong two opposite views of life. One of them is “Don’t run away. Stay and fight, and make here your heaven.” like in “Mad Max: Fury Road” (2015), and the other one is “This world is collapsing. Go and find the Promised Land.” like in “Waterworld” (1995). That’s all.

Tahsin Dantellioglu is Deniz Celiloglu’s finest performance. He combines his character’s pain with absurdity. And a small note for the sound department of the film. Without the excellent sound design of Oguz Kaynak and Cenker Kokten, Siren’s Call could easily be failed. They support the film’s nightmarish vision of Istanbul with their strong and well-calculated sound work. “Siren’s Call” (Son Çıkış, 2018) is not perfectly as Ramin Matin’s previous film, “Impeccables” (Kusursuzlar, 2013), and I don’t like the fatalistic view of life at the end, but it does a good job of representing pessimistic feelings of Turkey’s white-collar class, nowadays. And the film is certainly adept at pointing out the areas of stress and irritation in modern city life. And it is replete with gallows humor, and it should be classified as a “black comedy“. Ramin Matin pictures Istanbul as a big construction site with an unbearable noise and traffic jam. It is like a prison you can’t escape, and you won’t be released. It is like an endless labyrinth which Bukowski meets Kafka. Or at least, they are trying to do so. 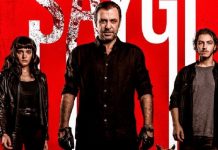 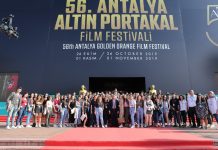